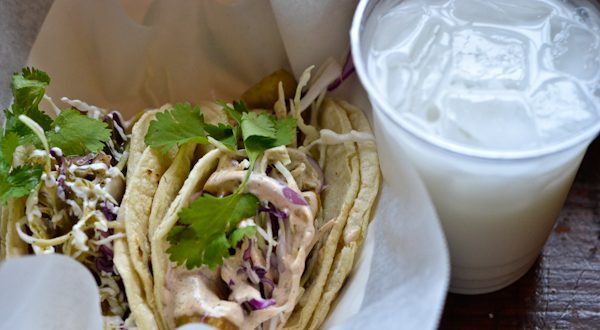 Shortly after our arrival in to Nashville last weekend, we set out for Mas Tacos Por Favor, which was recommended to us by Whitney & Johnny, the Bluegrass Tour Bus owners. We were feeling slightly vulnerable in those first moments on the bus so we weren’t quite sure how to feel about their recommendation (an old ass tour bus parked in the ghetto can be slightly overwhelming) but we took the recommendation anyway.

The building is a little sketchy on the outside but we felt instant relief upon entering. Immediately, we spotted a photo of Guy Fieri painted on the wall which led us to the assumption that Mas Tacos Por Favor has been featured on Diners, Drive-Ins, and Dives. (we were right, by the way)

I was pretty satisfied with the meal I had at Mas Tacos, considering they had two AMAZING vegetarian taco options: Fried Avocado & Quinoa + Sweet Potato. I certainly wasn’t mad about the Plantains, the Black Bean Soup, or the Horchata either. Oh, and Laura obsessed over the Pineapple Cilantro fruit drink. I am mad at myself for not trying it…. (but the Horchata was soooo good)

It was so nice to start our trip off with an amazing meal. We had plans of visiting Mas Tacos a few more times during our weekend in Nashville but we never did make it back. Next time, for sure.