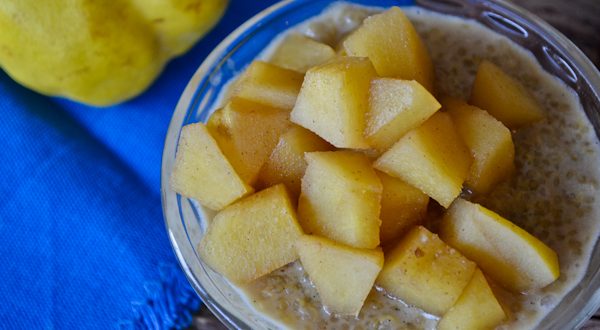 While a buddy of mine was putting together his holiday meal plan he called to ask where he could find a QUINCE. We discussed several grocery stores that carry rare/exotic fruits but I had no idea where to direct him. He eventually found the fruit and made a badass holiday meal that included the quince. After hearing about his meal, I knew that I wanted to try the fruit as well. He suggested I make a dish that included quince and quinoa simply because it would be fun to say.

Mission accomplished. I happened to be at a grocery store I rarely visit anymore, and I stumbled upon quince. I never thought I’d find it without actually looking. Then I found this recipe which I adapted from Little Upside Down Cake and Cannelle et Vanille.

This dish could definitely be eaten for breakfast or dessert, it’s pretty sweet.

Have you ever used quince in a recipe? If so, how?
I definitely look forward to trying more recipes using it.