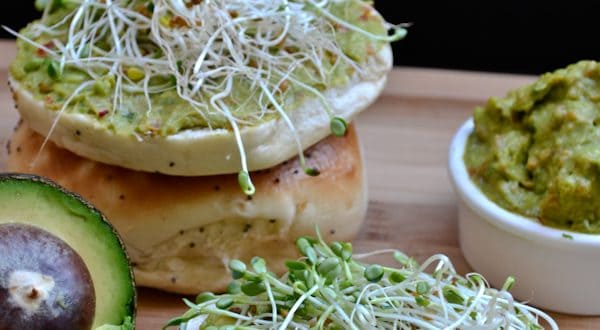 Every now and then I crave a bagel. The problem is, the only real way to eat a bagel is with cream cheese and cream cheese kind of turns my stomach, even the vegan stuff. I mean I like it but I don’t like it. I don’t like it when I start thinking about what cream cheese really is – it just seems “BAD” and unhealthy – like it has zero nutritional value. What’s the point? Pure gluttony? I mean, whatever. It’s just not my style.

A combination of things helped the idea of a veggie avocado bagel spread originate in my mind. For one, I remember a vegan buddy of mine discovering vegan bagels at Trader Joes. I’d never considered the bagels at Trader Joes being vegan until that point in time – I’d always walked right past them. There has been this “avocado + toast” craze going on lately, which got me thinking: I can use avocado as a bagel spread instead of cream cheese. Happy face. (I use avocado in all of my recipes lately haha)

So I added chopped veggies, and nutritional yeast to avocado that I had whipped and it worked perfectly as a spread for the vegan onion bagels. To make them even more tasty & nutritious, I added sprouts on top of the bagel. I got this idea from a veg buddy I went to school with, he posted a photo of a bagel topped with sprouts on Facebook.

The avocado + veggie mixture & sprouts take a “sinful” morning treat (bagel + cream cheese) and transform it into a GREEN nutritious breakfast – a perfect way to get the morning started.