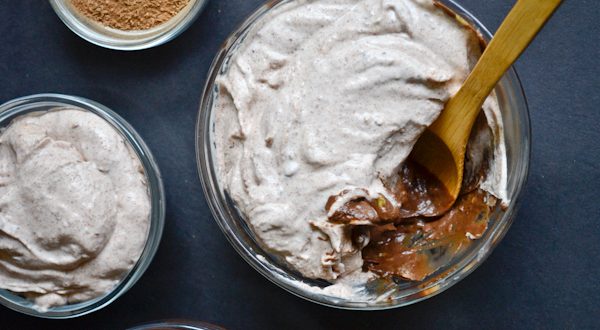 Last weekend, I stopped at the Boulder Farmers Market after rock climbing in Boulder Canyon. It was by far one of the best farmers markets I’ve been to (probably because they had a really good “food court” AND soooo many starter plants for me to choose from for the garden) So anyway, after we ate lunch (some yummy vegan food, obv.) we paired a scoop Chocolate Pudding Ice Cream and a scoop of Cinnamon Ice Cream from Boulder Ice Cream and it was sooooo good. The two paired perfectly together.

So. I got the idea to pair Chocolate Pudding with Cinnamon Whipped Cream and mock that perfectly paired duo that has anchored in to my thoughts since I sat in the park that Saturday afternoon….

This combo here…. is ever better than I remember it being in the park.
(oh, and and it’s vegan AND somewhat healthy-ish)

Trust me on the avocado in this recipe, you won’t even know it’s there. I’ve used avocado with chocolate in the past and taste-tested it on several non-suspecting friends. They couldn’t stop talking about how good it was. (duh)

A little side note on the coconut cream: I like to use the Coconut Cream from Trader Joe’s, it doesn’t typically have liquid at the bottom so the entire can is full of rich, thick cream. If you are using a different brand of coconut milk, chances are you’ll find the liquid – don’t dump it, you can save that ‘coconut water’ and use it in smoothies and/or other recipes.