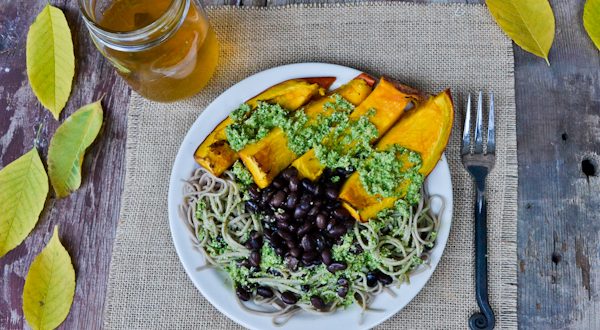 Tis the season for pumpkin EVERYTHING. Have you been to Trader Joe’s lately? They seriously have EVERYTHING pumpkin. I have to stay away from the place this time of year. Pumpkin cornbread mix, pumpkin cinnamon rolls, pumpkin pop tarts, pumpkin scones, pumpkin ravioli, pumping this, pumpkin that. Almost non of it vegan. Sigh.

For the first time last year, I learned to bake my pumpkins and gather my own puree versus purchasing pumpkin puree in a can. I’m stepping up my game in the kitchen. Watch out November, I’m hot.

I recently purchased a new cookbook, Isa Does It
It’s a book I’ve wanted for quite some time and I finally broke down and got it! I was stoked when I found a pumpkin recipe in the cookbook, it’s the first thing I made. I’m going to give you this Chimichurri Pumpkin Bowl/Plate recipe in this post but then you HAVE to buy this book for the other recipes. The Mushroom Hot Pot, the Baked Garlic Curry Fries, and the Jerk Sloppy Joes are among some of my favorite recipes.

Isa does not know me (yet) but I’m hoping to introduce myself to her next month when I visit her brand new vegan restaurant in Omaha, called Modern Love. Uhm, she’s serving a dish of chili & cinnamon rolls at Modern Love (genius!). I guess that’s an “Omaha” thing (cinnamon rolls paired with chili, that is). I’m down. Sounds like it could be a “Crista” thing. Don’t be surprised when I dedicate an entire blog to chili and cinnamon rolls – pumpkin cinnamon rolls, duh.

So anyway, about this pumpkin bowl (that I plated). I love that it has several different elements and flavors, all reminiscent of autumn. Instead of turning the pumpkin into some fancy baked good, it is baked and eaten as is (seriously, who does that?? it’s GOOD). Along with herbs (that I got out of the garden), the pumpkin seeds are used to make the chimichurri sauce and spread atop the entire dish. Soba noodles are recommended as the starch in this dish, but QUINOA could be used as well. Look, I love noodles AND I love quinoa – it’s a hard choice to make. (good luck to you)

For the pumpkin and noodles: