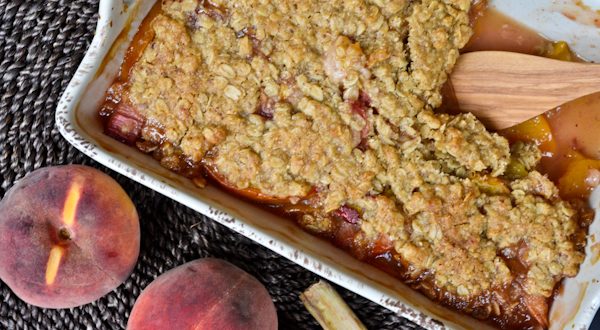 I have mentioned my love (obsession) for Colorado peaches. At any given time over the last month r two, I’ve had at LEAST 5-6 Palisade peaches on hand. I’ve found several different ways to enjoy them: with vanilla yogurt, as a bedtime dessert, served with ice cream, and some days I’m in the mood to bite in to the juicy fruit and let it rip down my chin all messy-like – feels like summer time.

So, I had some rhubarb in the garden that I wasn’t quite sure how to use. Discussing with a friend, we both decided that we NEEDED to know what that rhubarb would be like when paired with Colorado peaches. Everyone is getting ready for “autumn” around here (is it football that everyone is so darn excited about??) so a “crisp” seemed appropriate. After my second batch of Peach Rhubarb Crisp (the first didn’t even last a full day), I’ll say that peach and rhubarb ARE a perfect pair.

This “crisp” recipe is very similar to the crisp recipe I used in my Apple Pear Crisp. This recipe gets a lot of compliments, so you may want to bookmark it- using the same recipe, you can swap the fruit… guaranteed goodness.