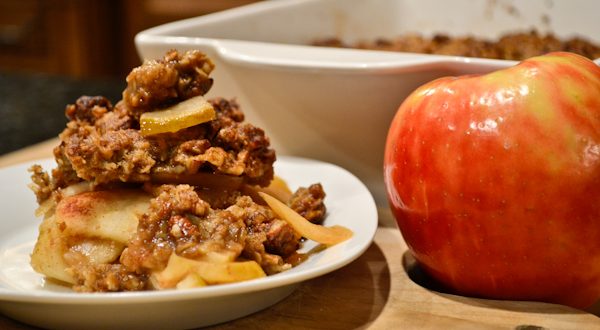 Barbara Bakes says: “The secret to a perfect apple crisp is to use great apples. You want to use a combination of sweet and tart apples. Choose apples that stay firm and crisp like a sweet Rome Beauty or a tart Granny Smith, and combine it with a tart Jonathan or a sweet Honey Crisp that will break down a bit when baked.” My personal favorite apples to use are Pink Lady’s, Honey Crisp, and Jonagolds.

In the recipe below, I used pears in addition to apples which create a distinctive flavor, much different than a traditional apple crisp. There are many different fruits you could use to create a crisp (or a cobbler) including peaches, rhubarb, plums, blueberries and/or cherries. You can even add a variety of nuts or even raisins to your crisp if that’s what you dig.

Fruit crisps are easy to throw together and are appropriate for every season as far as I’m concerned! I don’t know about you, but a fruit crisp always satisfies my sweet tooth without a major feeling of guilt (ahem chocolate & cupcakes.)

Serve with coconut or almond ice cream. There will be liquid at the bottom of your pan that can be drizzled over the top of the crisp.

what Valentine’s Day was cancer is evil